…and the Regency Period

Tradamis can help to bring the period to life with:

These resources were collated in 2005, the 200th anniversary of the Battle of Trafalgar in conjunction with HMS Victory. Scroll down for more information. 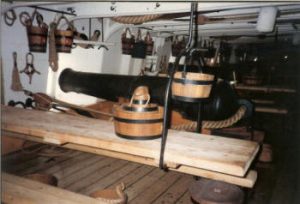 Learn the music, steps and figures to the dances. Many of these dances (and English country dances in general) are still enjoyed by folk groups everywhere. All that is needed is the space, your everyday clothes and comfortable footwear: but why not add some historical authenticity by making your own costumes. We can help with any of these activities or put you in touch with the relevant experts.

A ball of 1805 may have included some of the following country dances: 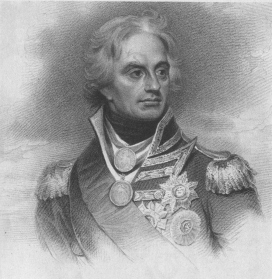 Sing a Song of Nelson 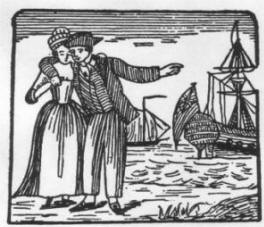 Tunes of the Period

Drops of Brandy – at One Bell (noon) the ship’s fifer played this to give notice that the tub of spirits was ready. Also had words which were sung to it and was played while weighing anchor.

The Rogues’ March – played or just beaten on drums when punishments such as flogging were being given.

The Sailor Laddie – a version of this was heard at Gosport in 1781.

Donkey Riding – a shanty associated with loading cargo – the “donkey” was the sailors’ name for a chest containing provisions or belongings.

The Keel Row – typical in the repertoire of a ship’s fiddler.

The Girl I Left Behind Me 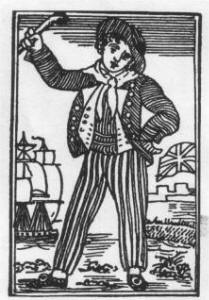 Renaissance courtiers attributed several dances as being performed to the rustic instrument known as the hornpipe – an instrument of great antiquity consisting of a single reed pipe with a cow horn bell (sometimes with 2 parallel pipes) At various times it meant a jig, a reel or even a country dance. Shown opposite is a rustic dance being performed to a hornpipe player.  Country dances were often stepped to the distinctive 3/2 syncopated hornpipe tunes and these are sometimes called “maggots” from the Italian maggioletta meaning a whim or delight. Later in the mid 18th century the 4/4 or 2/4 common time hornpipe appeared, now referred to as the “Jacky Tar”.

The Irish, Scottish or English solo dance has intricate steps and became associated with sailors.  It is said that Captain Cook would make his crew perform hornpipes as exercise during spells of calm weather. By 1760 the association with the archetypal sailor “Jacky Tar” is well established. A play-bill from Drury Lane in May 1760 announces a “Hornpipe by a sailor from The Royal Sovereign” (a ship of the royal fleet)  School boys wishing to be sailors practiced it and it was included in 19th century naval training. Hornpipes are often performed with clogs, especially in Northern England. 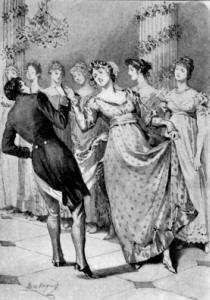 Nelson wins the Sea Battle but not the Battle of the Ballroom! In the early 19th century a big change started to take place in the fashionable ballroom. The old English Country Dances started to fall out of favour. The French Quadrille (from the Italian “quadriglia” – a troop of horsemen in square formation), which became a contredanse (French Country Dance) under Napoleon, was brought to England in 1816. This dance was also taken up enthusiastically by the Americans, and was one of the precursors to their Square Dances.

Although many country dances were being written to a waltz rhythm, the dance itself was considered too daring at first, because of the closeness of the couples dancing it. It was, however to eventually sweep away the old community dances to the extent that, now, when we talk of Ballroom Dancing we think almost exclusively of dances for couples. It is said to have been brought to Paris by Napoleon’s troops returning from the invasion of Germany and then to London in 1814.

Bold Nelson’s Praise:  A Book of Dances, Songs, Tunes and Costume from around 1805

160 Sea Songs by Roy Palmer: A revised and expanded paperback edition of The Oxford Book of Sea Songs.