Do you want an alternative to a nativity play for your children to perform this Christmas?

Are you interested in your children experiencing another kind of celebration rooted in English folk tale and traditions?

Tradamis can bring you exactly that in the form of Mumming Plays, a tradition in England since the middle ages, and now brought vividly back to life by your children in your school. 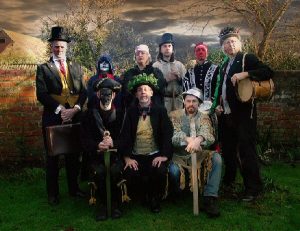 Mummers plays tend to be performed in rhyming couplets and take the form of a battle between good and evil. They include wonderful characters such as St George, a hilarious comedy Doctor with all sorts of potions, a fool and sometimes old favourite like Father Christmas or even Robin Hood may turn up!

Our plays can be adapted to fit in varied numbers of children (up to a limit of 15 in each – each class will have 2 or 3 plays to perform) and are short, easy for the children to learn, vibrant and fun.

Tradamis will come in to your school for a day or two days and create a series of mumming plays for your children to perform.

We will provide scripts (in advance), songs, dances and costume and mask ideas. We will direct the children in their performance, song and dance and facilitate the creation of imaginative costumes. We will leave you with three polished plays to use as you wish.

Of course you will want to show the plays to the parents and other children of you school, but we also suggest you follow tradition and take the plays out in to your community – for example take them to your local Care Home to show the residents.

Suggested structure of the day 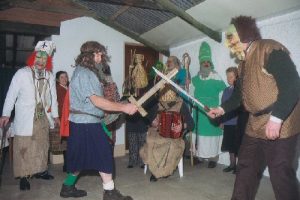 Three experienced Tradamis performers will come in to your morning assembly a perform a hilarious short play to give your whole school an idea of what Mumming plays can be.

The year group we are working with will then be split into three smaller groups (preferably no more than 15 per group). These groups will work separately for an hour on different aspects of the plays – one group rehearsing a play, one group working on dances and songs, one group making costume and masks.

The groups will swap over so each one spends and hour on each activity, so creating three different plays complete with dance, song and costume.

The day will end with a plenary session and special assembly to show the other children of the school the hard work and for them to enjoy the results.

You then have three fantastic traditional plays to take out into your community,-or simply around your school, and the resources to use them again and again.

One day in you school, including three professional performers and everything need for your productions, will cost around £600. To spend a little more time on each aspect of the plays, or to include more children in the process we can come for two days at cost of £1000.

We recommend you think about taking the finished project into care homes and other parts of your community because as well as being a fantastic experience for the children, you may be able to get extra funding for the project in this way.

Mumming plays are a particularly Christmas event, but we can also bring you a very similar experience to celebrate other times of year: