The term ‘Morris’ covers a variety of styles of show dance from different parts of England. Something with a similar name (‘Moorish’, ‘Moresque’) seems to have flourished throughout Europe in the 15th century, and traditional dances in countries as far apart as Spain and Rumania are still performed by teams looking somewhat similar to English Morris dancers. A theory that Morris dancing originated as a pagan rite possibly sprang from the disapproval of such revelry by Puritans in the 16th and 17th centuries, but there is no evidence to support it.

The earliest references are sparse, but show that something called ‘Morris’ was performed at the courts of kings and nobles, and as part of royal and civic processions. Rampant inflation in Henry VIII’s reign seems to have put an end to such entertainments, and Morris is found in the 17th century in villages as entertainment at ‘Church Ales’ (the church fetes of the time), and sometimes in stage plays – Shakespeare’s colleague Will Kemp famously danced from London to Norwich in nine days, but this publicity stunt seems to have been a last attempt to rekindle the dance’s popularity.

The triumph of Puritanism after the Civil War quelled such festivities, and over the succeeding centuries Morris survived in only a few villages or was performed by groups of dancers travelling to cities to dance for what monies they could collect. 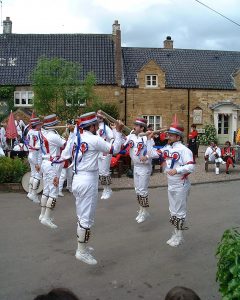 When ‘discovered’ by folk music researchers around 1900, Morris had developed distinct regional variations, and these are the dances upon which modern teams base their repertoires. The style most familiar to the general public, the team of six dancers with bells around their legs and handkerchiefs in their hands, is called ‘Cotswold Morris’, having survived principally in Oxfordshire and Gloucestershire.

A wilder style, now called ‘Border Morris’, was found in the counties on the English side of the border with Wales, involving simple stepping and vigorous stick-clashing by teams wearing a simple costume of rag-decorated clothes but often faces blackened as a ritual disguise.

In Lancashire and Cheshire the dances were processions, very suited to the industrial towns, and were often performed in clogs. This style is known as ‘North-West Morris’. And an East Anglian style has been recreated from the memories of former dancers, a style whose basic figures are very similar to those of country dancing, performed in teams in which at least one dancer is a man dressed as a woman, known as a ‘Molly’ – thus, the style is called ‘Molly dancing’. 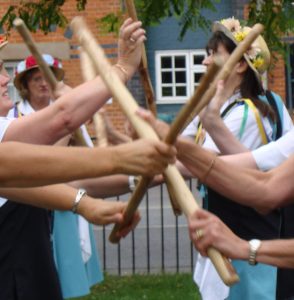 And the term ‘Morris’ broadly used also covers the sword dances found in the North-East. In Yorkshire a dance style had survived which links eight dancers holding inflexible ‘swords’, over and under which they twist and turn, and in Durham and Northumberland teams of five danced using flexible ‘rapper swords’ (thought to have originated as implements for cleaning pit ponies’ hides). These two traditions are known respectively as ‘Longsword’ and ‘Rapper’ dancing.

Within each of these regional styles there are multiple local variants, and there are also ‘one-offs’ which do not resemble any of the above – the Abbot’s Bromley Horn Dance in Staffordshire, the Britannia Coconut Dancers in Lancashire, the Great Wishford Faggot Dance in Wiltshire. It’s a rich and strange world, but is part of the modern world, open to anybody who wishes to take part. Those exotic dancers you see at the weekend are in everyday work during the week – in teaching, computer work, business, shops, office work, bringing up their children. They all had to learn dancing – why not have a go?

Find out more about this  mysterious tradition, make costumes, clash sticks, jingle those bells – have fun!